At Space Doctors we place culture at the centre of our work. Closely following emerging cultural narratives allows us to help our clients tap into trajectories of change and create more meaningful brand futures. To keep our thinking fresh, varied and impactful we constantly look to cultural innovators for inspiration and provocation. One way we do this is by inviting guest speakers from across a broad range of specialisms to share new thinking and expertise from their corner of culture with us, we call these ‘Inspiration Sprints’.

Our most recent speaker was Artist and Lecturer Angel Rose Denman whose work has been exhibited internationally in spaces such as Centre Pompidou, Somerset House, The ICA, and The British Film Institute.

Based between Hastings and Los Angeles Angel Rose’s interdisciplinary practise uses performance, writing, video, and printed media to explore the expansive notion of ‘freedom’ and its essentially contradictory nature.

Angel Rose treated us to a performance of her extensive work on the theory of Fun and a first look at her most recent thinking on the function of irony and transgression within contemporary culture.

We grabbed a few minutes with Angel Rose to dig a little deeper into how serious she is about fun:

What lead you to choose fun as your subject?

I started thinking about fun seriously while I was finishing my MA at the University of Brighton. I was reading the Marquis De Sade at the time, and I was really interested in his ideas about freedom. For Sade, sex is the point where reason fails, and I wondered if I could make a similar argument about fun. If fun is the point where reason fails, could there be some sort of disruptive political potential in this? I wrote an essay/manifesto called ’The Meaning of Fun’ based on this and eventually turned it into a zine called Serious Fun, which I produced in collaboration with a Marxist drag queen called Oozing Gloop.

Pleasure vs Leisure – what is the difference between fun and consumption? Is all fun ‘good’ fun?

I agree with Ben Fincham’s observation that fun is so often conflated with play or games or other forms of consumption that may or may not actually be enjoyable.  Fun is mostly relational. It’s a slippery subject and that’s why I was interested in it. While we were creating Serious Fun, myself and Gloop were also reading a lot of Adorno. In response to his ideas, we wanted to emphasise the aspects of fun that are communal, free and based on the imagination, in order to propose a new kind of ‘fun’ that might be found or created outside of the system of the culture industry. A fun that isn’t simply just a relief from work… Fun as fundamental driver. Fun as a value that should be at the heart of all our pursuits. I feel like fun is a bit of dirty word in many circles, because it’s perceived to be the opposite of seriousness. 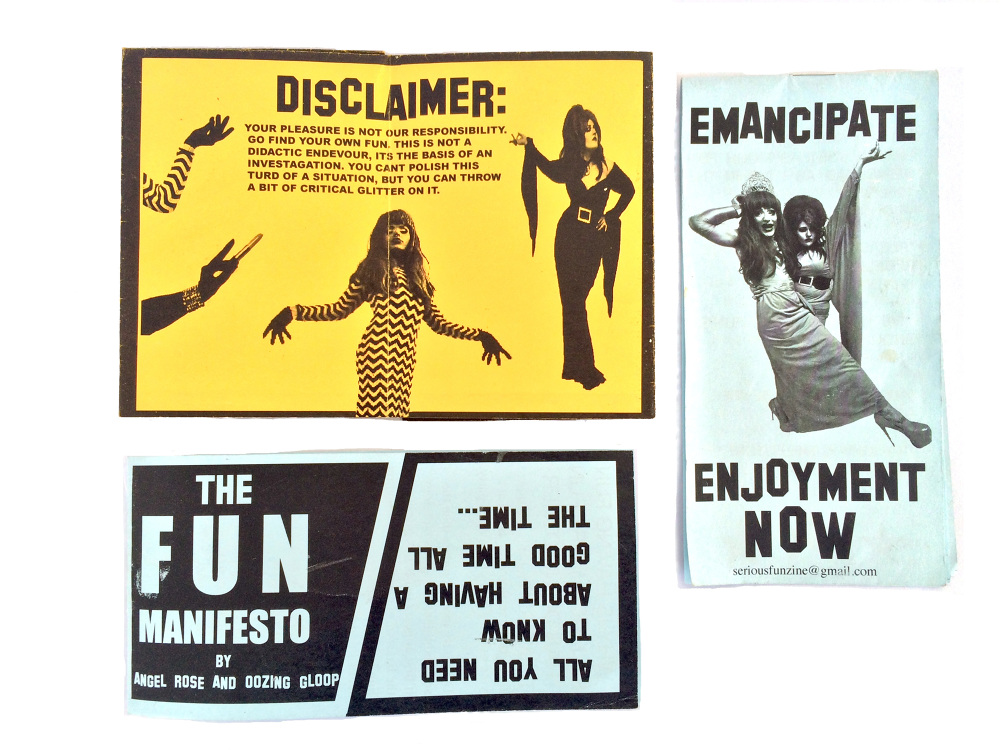 What role does fun play in health and wellbeing? Should fun be prescribed on the NHS?

The way I define fun is ‘a meaningless activity that gives our lives meaning’ , so in terms of mental health, fun should absolutely be prescribed on the NHS!.. but then again, if it was enforced, it probably wouldn’t be so fun…

What I tried to outline in my presentation for Space Doctors was the idea that irony and transgression, which were traditionally used by the left as a way to undermine power structures, have been co-opted by today’s alt right internet cultures. This is an idea put forward in Angela Nagle’s book Kill All Normies. I don’t think counterculture is dead, but I agree with Nagle that the left-wing countercultural strategies seem to have exhausted themselves, and this poses an issue for the artists and thinkers on the left today.

What do you do for fun?

I used to be heavily involved in the queer night club scene in London, but nowadays I’m usually too lazy to leave the house. But when I do go out, I think dancing is the most fun thing to do. It feels like freedom. I used to work at a retirement home and the old people would always get nostalgic about public dancing, because they remember how that type of freedom feels. Dancing in your bedroom mirror is pretty fun too!

Raw Carnivore Diet. I accidentally ate raw meat once and I’ve never puked so much in my life, so I was genuinely shocked to see people doing this as a lifestyle. I was also intrigued by how political it is, in the sense that it seems to be becoming popular with the angry young men of the alt right, as a backlash against liberal values encompassed by veganism.

At a time when global culture feels so serious it’s easy to forget or dismiss the importance of fun and its cultural value, Angel Rose’s refusal to accept this makes a powerful and compelling point!

Leaving us asking ourselves:

If fun is the meaningless act that gives life meaning, how does it impact our work in creating meaningful futures?