Why China is Ripe for Semiotic Insight – A Supercharged Market

China is as large as it is complicated, and it is studied as much as it is misunderstood. Its prominence, both culturally and economically, continues to inspire fascination around the world. Academics, brands, and companies are constantly battling to get as close as possible to the restless realities that can be found in China. There is no other market on Earth where you can see such huge forces re-organising society; new structures, new meaning, and new futures being created at a speed as yet unseen in global history.

In contrast to the rapid pace of change is a profound and unsurmountable attachment to the past. Incubated philosophies and traditions are so entrenched in everyday life that despite their profound influence, they can easily become unnoticeable to locals and foreigners alike. Commercial semiotics enables researchers and research buyers to track and ground these powerful, yet often unacknowledged transformations.

The Chinese market has matured far beyond idolising Western consumer goods and any brand that does not think this should reconsider its understanding of consumer culture. A more culturally-aware approach is essential in order to reach a position in which one can supply content consumers treat as valuable

Research should seek to understand this vital connection between consumer and context. But the way may be difficult to navigate due to the complicated nature of Chinese culture and the constant intermingling of past, present, and future that belies China’s intricate and dynamic culture.

China’s 5,000 years of continuous history both legitimises current Chinese leadership and emphasises the importance of legacy. The paradox of looking forwards and backwards with equal fanaticism is a key tension influencing contemporary Chinese society.

Paradox can also be seen in the frictionless mixture of Daoism, Confucianism and Buddhism. Despite dogmatic tensions between the three, these spiritual disciplines coexist with each other and modernity. They represent the spirit of China; an omniscient force weidling influence in every corner of society. This collision between deeply rooted codes and the restless forces of modernity creates the complexity of contemporary China.

China is the vanguard of the future, containing all the excitement (and the corresponding problems) that our brave new world can muster. Pollution, demographic crisis, hyper connected e-commerce, VR, and robotic emotional carers are all willingly embraced, and this is the point: China has an appetite for change, no matter what it may take to achieve. 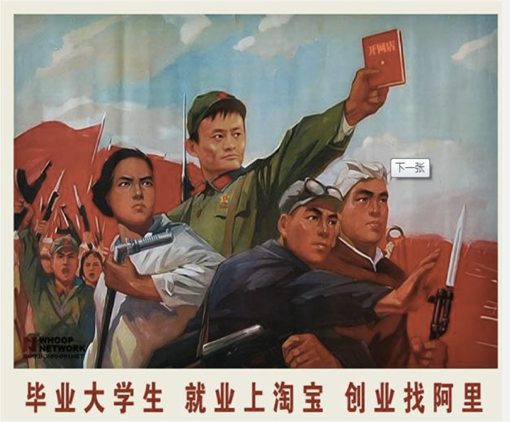 毕业大学生就业上淘宝创业找阿里” “Graduate from university, find a job at Taobao, do pioneering work at Alibaba

China’s marketplace changes at speed, often at a pace unmatched by more clunky foreign business structures. The pollution is bad? Fine, let’s invest 36% of the total global total expenditure on renewable energy. No problem is too big, and no solution is out of reach.

Another way of looking at this is to consider the explosion of innovation within the homegrown cosmetics industries. Or consider Alibaba: the company’s history is built with strong Chinese cultural girders (humble beginnings, grand dreams, community roots) and also provides a dynamism that sates a hungry, future-facing nation. Through embracing breakneck innovation and honouring traditional structures of organisation, Alibaba harnesses both the past and future to create an unstoppable force of Chinese innovation and connectivity that is managing to shape the future without challenging beliefs and values.

Alibaba demonstrates how Chinese innovation works best in China. Western innovation that isn’t adapted and grounded in Chinese culture will be forced to adapt (Facebook) or face failure (Tesco).

China’s language perfectly demonstrates the country’s cultural complexity. Simplified Chinese, China’s new written language, was officiated by the PRC to replace the “perversely difficult” classical Chinese—in an attempt to foster literacy across the nation. To this day the debate regarding its success and benefit is still on, with many blaming it for eroding the rich meanings inherently present in traditional Chinese scripts.

However, written Chinese is still viewed as sacred (particularly in scholarly circles), with each character willed with a wealth of significances. Thousands of years of history and meaning expressed in a few strokes; each character comes pre-set with a library of references rich for semiotic analysis.

The potential for inoccuous characters to be combined in ways that reveal hidden and often controversial or offensive meanings is a stark reminder that language can deeply reflect societal views, which no matter how anachronistic, are still mobilised every day. It demonstrates a fundamentally different way of approaching language compared to Romantic counterparts.

This encoding is also evident in Chinese internet slang. Although the internet is controlled strictly, users mobilise ingenious language adaptations to fool the top-down censorship. For instance, modern language users are drawing on a tradition of punning in the Chinese written language to culturally innovate.

Technology (particularly keyboard input methods) will have a profound effect on how language is used in China, given the requirement for a fluent interface between a non-alphabetic writing system and digital rendering. Understanding both the foundational structures of linguistics and culture, and their mutating contemporary expressions allows Space Doctors to create penetrating insight into emergent behaviours.

A look at China’s restless reality reveals fertile ground for semiotics and communication, both grounded in deep cultural understanding and the rigours of modernity.

Semiotics is most useful when connecting seemingly disparate factors, organising webs of meaning that quantitive and qualitative approaches can’t always provide. Context matters. For semiotics, the more nuance, the greater the ammunition with which to create simplicity out of complexity.

To look at China through the lens of semiotics is to see a kaleidoscopic and brilliant view of modernity, and the genesis of the future.