“Gen Z” is probably one of the most hyped words in today’s marketing world. When we talk about Gen Z in China (年轻人，95后，00后，千禧后), they are often associated with certain stereotypes – rebellious, dramatic, Douyin addicts. But is that the cultural truth among Chinese Gen Z? Growing up in a world that is constantly in flux, how do they pursue their unique ways of self-expression?  And why are they shaped in the way they are?

At Space Doctors, we believe that culture is the hidden influencer. In this case, the social context is critical in shaping up a generation’s culture.

Millennials, were the first generation of the single-child policy, growing up in the market-driven China, the first generation to be exposed to international culture from an early age, and the first internet generation. Therefore, they are new to the great freedom they have. It is exciting for them to embrace this new space to find a singular path, different from their parents or counterparts. They were the first to start pushing back against conformity and carve a unique path to express themselves, liberated from labels and stereotypes. The traditional education and environment have refrained them from expressing unique individuality, so they need to reject, react, and rediscover the social norms to build their identities.

Gen Z however, were born as digital natives and highly connected using social media. Exposed to the diversity of various subcultures from an early age Gen Z feel able to express themselves more openly and feel more comfortable skin. Having grown up in a conflicting time when China is prosperous but competition is fiercer than ever and the broader outlook is more uncertain, Gen Z in China show a degree of disillusionment with materialism and question the hyper-consumerism that is surrounding them. The world is not a permanent construct for them, instead, they always want to “try on” what might work for them.

As a result, self-expression for them is less about standing out from the crowd, but more about exploration to gain a true understanding of the multi-faceted  authentic self to claim agency over their identity.

Speaking of Chinese GenZ, Garlica Princess (蒜香公主)  is someone that can connect you closer to the trendy GenZ pop culture. Garlica Princess is a rising pop star and known as the “sweet spicy girl”(甜辣女孩). At the first glance, you may recognize her as one of the “typical” GenZ stars – pink hair, quirky make-up, dramatic style, and “cool” attitude. However, as her name suggests, her actions and songs embody what she loves and stands for. 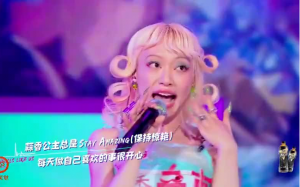 “I love eating garlic. I need it for every meal because it makes me feel safe. It’s stinky at first impression, but people kind of cannot live without it. I think I am like garlic. I am far from the social standard of beauty, but I have my own taste. Garlic is not only my favorite food, but also stands for me – someone not fitting in anywhere but has its own unique personality.”

Chinese Gen Z’s commitment to the journey of self-exploration, presents an opportunity for brands to support them on this journey. To build genuine connections with Chinese Gen Z, brands should:

Want to explore how your brand could pivot to build genuine connections with Gen Z people in China? Get in touch